This month we bring you a Algerian-French, Muslim-Christian couple who has seen it all; from racism and prejudice to parental opposition to learning from each other and of course, cultural integration. Meet 62-year-old Naima and 66-year-old Jean Pierre, a couple who met and married each other long before mixed race/mixed-ethnicity marriages were gaining popularity.

Naima and Jean Pierre are both well educated – Naima has a college degree and Jean Pierre has a law degree and worked as ‘in-house’ counsel at a major French construction group, and who upon retiring, immediately set up a consultancy business advising French companies. He is also interested in American music, particularly the blues and country. Naima worked as a housewife and along with her husband, who shares her love for travel, lived in various countries. She also enjoys reading and fashion.

Over to Jean Pierre (JP) and Naima.

1. If your love story was to be made into a movie, what would you call it?

2. How did you meet? Who made the first move? How? What attracted you to each other?

JP: Like a lot of couples, we met while working for the same employer. Although it was some time ago, I believe I did the first move. She was (and still is) an attractive woman.

I was born when Algeria was still a part of France (Editor’s Note: Alegria was a French colony). I was convent educated, despite being born in a Muslim family.

I always kept in touch with the nuns in my hometown. This is how I got a job for a company from Lyon, France, and how I met Jean-Pierre. Our attraction was very much mutual.

3. Please tell us about you and your partner’s cultural backgrounds

JP: I am from a middle-class back-ground and was always attracted by people and things outside France.

I am from a middle class background, but Algeria, when I lived there, was a social-communist country. So in theory, there were “no classes” in society.

4: Tell us about the dating challenges you may have faced. What were your parents’/family/relatives/friends’ thoughts about you dating/being in a relationship? What did you think about being part of an interracial/international couple?

JP: I would have thought that this Christian-Muslim relationship was likely to generate tensions on the other side, that is, my wife’s side but actually, it turned out that it was the other way round!! As soon as I got to know my wife’s family, I was immediately part of it while my father never really accepted my wife until his death in 2003. Naima’s parents were great with me and I always felt comfortable with them.

In a Muslim country, girls don’t go out with boys. It is frowned upon. But for me, things were relatively simple since my father liked Jean Pierre, and since he was a colleague.

My family wasn’t much surprised by my choice. Although they were all very faithful and practising muslims, and although I had broken one of the main prepect of the Holy Kuran according to which “a Muslim cannot marry a non-Muslim”, they still welcomed my husband with open heart and arms.

French culture is very rich but it wasn’t something new to me, so I integrated in France with ease. I find that being an “international couple” brings us a lot. We broaden each other’s world through our differences and similarities in the way we see the world and react to things.

5. Related to # 4 – Did your families approve/not approve of each other (include any memorable first meeting memories) and what you did/didn’t do about it?

JP: See my answer above. Now we laugh about it because my brother is also married with a “stranger”, actually, with an Asian woman, and I am pretty sure that for both cases, there is a lot to do with our father’s opposition to anything coming from outside France.

My father agreed right away. He knew that the education he gave me wasn’t in line with what was expected from women in my country. My mother wasn’t so keen at first. I simply explained that she could either accept my choice, and everything would be well, I would come and visit as often as possible; or she could refuse it and she’d be the loser in that bargain.

6. How did you/your partner propose? How is this similar to or different from your native culture?

JP: I am from the old school and I asked my [in-laws] for their daughter’s hand and they said yes right away – Nothing exceptional but they were very open-minded. My parents in-law have always been kind to me from the very start and the whole family as well. When I announced the news to my father it was a NO but I didn’t care anyway

Jean Pierre came and asked my father for my hand properly. He said I would never regret marrying him (and to this day I haven’t).

7. What were your ideas of an ideal mate before you met your significant other and how have these ideals evolved with your relationship?

I never had an ideal, but one sure thing was that marrying an Algerian man was out of the question.

8. What have been the cultural challenges, if any, that you have faced in the course of your relationship?

Actually as soon as we got married we moved to Africa to start an expatriate life and we both had to face other various challenges in each country we lived in. I did not face any real cultural challenge because although my wife was born in Algeria, she was educated in a French school and we were able to convey feelings and understand each other very easily which may be more of a challenge/hurdle if the two persons do not speak the same language or communicate via a third language for which they both do not have a perfect command.

9. How do you handle cultural conflicts/differences (when you dated, and after marriage)

I unfortunately suffered a lot of racism and prejudices. It was the most difficult and painful thing to handle. I am always anxious that my daughter will suffer the same, but luckily she didn’t have to go through that herself. 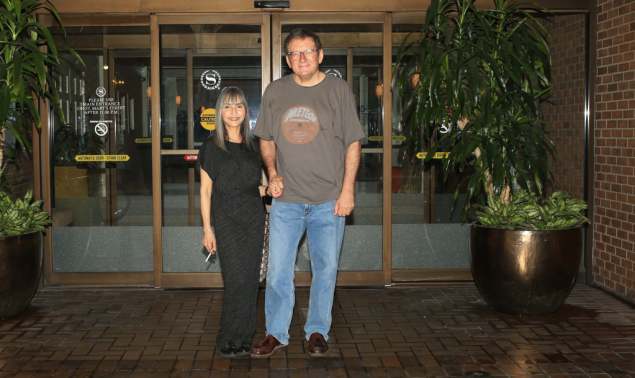 10. What kind of a wedding did you have? Any arguments about what traditions/customs would be followed or not?

JP: To please my mother, a Catholic wedding was singled out, which I regret now – there is no reason why one religious wedding would be preferable to the other – I would choose a civil wedding if I had to do it again. My father-in-law travelled to France to attend our wedding and that was cool – but I do not have a happy memory of our wedding because Naima was not comfortable.

We had a church wedding but without blessings, since I am Muslim. This didn’t change anything regarding my own faith. Unlike Jean Pierre, I don’t regret anything. It was my mother-in-law’s wish and I wanted to please her above all.

11. Your favorite memories that pertain to cultural integration (generally in your relationship and not just wedding related)

JP: L’Aid ceremonies in Algeria with Naima’ s family and our daughter.

Attending midnight mass (for Christmas) with my parents-in-law and my daughter. That is one of my fondest memories.

12. How do you (or don’t) try to integrate your different cultures/festivities/holidays/etc into your everyday life?

JP: We both try to accommodate the cultures but we both have a common grounding on key matters which does not preclude disagreements on other matters

I take part to events that are attractive to me and that have a true meaning, be it religious or secular.

13. What have you learned as a multicultural couple, about each other/ about society’s perception of you as an interracial couple?

JP: Probably more challenging than a standard couple of the same nationality but much more rewarding and probably more stable.

One needs to make lots of concessions and stay open to the world around them. It is important to be a part of the community we choose to adopt even though, it was a real challenge for me with some quite painful episodes.

14. What are some pieces of advice you may want to pass on to those dating outside their own race/culture/religion/etc.?

JP: Although there may be a couple of renunciations which may be necessary for practical purposes, never try to impose your own way of life or culture to the other. It is often a subtle combination with a certain degree of mystery and luck but that is probably valid for any kind of marriage.

Love can conquer all, you need to stay faithful to who you are and to your partner. See disagrements and misunderstanding like something that help you grow as a person and a couple instead of a deal breaker.

This interview was organized and coordinated by Séverine Perronnet. She also did all the French-to-English translations.

The Odd Couple: A Taiwanese-American and Spanish Love Story

0 Comments on “From Seybouse River to Rhone River: An Algerian-French Christian-Muslim Love Story”