My first introduction to Chinese/Lunar New Year was in Beijing, China in 2007, when I was 25 years old.  I hadn’t met my future Chinese American immigrant husband, Eric, yet but had always dreamed of visiting China as I was fascinated with ancient cultures.  My brother was teaching English in China so my mom and I went to visit him during his vacation, known as the Spring Festival. We hadn’t thought twice about booking tickets for my brother’s vacation but little did we know that this was the most important celebration of the Chinese calendar year. We also didn’t know about the mass exodus of people who travel to be in their hometowns during the two-week long holiday.

Unaware of all the festivities that were about to happen later in the evening, we climbed the Great Wall in the morning and ate Peking duck in the afternoon near Tiananmen Square. A few unimpressive fireworks went off after dusk fell, and as tourists, we didn’t think much of it, attempting to go to bed early to be refreshed for another day of tours. Wow, that didn’t work out. As the fireworks intensified and persisted well into the dawn, we had no choice but to immerse ourselves in the culture shock!

A guide told us that everyone goes to special outdoor markets after the New Year. Curious to check it out, we joined all the Chinese families at the market to welcome in the Year of the Pig.  My memories of that market involve seeing various food available on sticks, some from the food pyramid, but most that were foreign to us (i.e, fruit, meat, sweets, and even insects).  The market was decorated in a Disney-esque style in red, gold and pink, and thousands upon thousands of people were thoroughly enjoying their holiday.  There was so much emphasis on the Zodiac pig theme, which I must say, was entertaining for us as American Jews who don’t eat pork.

As briefly mentioned above, more people on Earth travel for the Lunar New Year, called Chunjie 春节 in Chinese, than any other time of the year.  With globalization, people study or work very far away from their hometowns and want to be reunited with their family during their holiday.  An exodus in its own right as nearly all 1.4 billion people in China are celebrating the equivalent to Thanksgiving and Christmas at the same time.  That would be 4 times the population in America all travelling during the holidays!

Here’s the breakdown as presented by TelegraphTravel:  In numbers–
Chunyun/Exodus – movement of people

Of course, the journey is a small part of the holiday — the traditions that are passed onto the next generation is the important part. Decorations are put up in homes to welcome in the new Chinese Zodiac year, families make dumplings around their kitchen tables, and children receive red envelopes with cash inside.  Red is a lucky color to Chinese people, thus the decorations and envelopes represent prosperity.

Families gather to eat round glutinous rice balls with black sesame (and other various fillings) inside which represent completeness – the gathering of family.

It’s a time to relax, celebrate life with extended family, and look forward to the next year.

This year, the holiday starts on February 16th and it is the Year of the Dog.  Every year the Chinese zodiac animal changes and is on a 12-year rotating calendar, meaning every 12th year the same animal comes up again.  If you are born in the Year of the Dog, (1934, 1946, 1958, 1970, 1982, 1994, 2006) then you may embody these personality traits: loyalty, kindness, and cautious/prudent.  If you are pregnant this year, these are the traits that Chinese people believe your child may embody.

When my husband, Eric and I first met, he wasn’t celebrating Chinese holidays because they weren’t American holidays and he didn’t get time off of work.  Eric said his parents were the same way ever since they’d moved to America (in the late 90’s, when he started high school).  His parents even ordered a pizza one year for Chinese New Year because it was round (representing completeness) instead of the traditional food.

Unfortunately, assimilation into American culture can sometimes leave immigrants deprived of their cultural heritage.  It is up to that community of people to continue their own celebrations in an Americanized-way.  With that in mind, Eric and I decided to start hosting an annual dumpling-making party for the Chinese New Year.  Because the Chinese New Year is based on the moon, the holiday could begin any night of the week (another reason not everyone can celebrate). We always host our party on a Saturday so our friends can join without time constraints.

We typically put ground-chicken and chive in our dumplings because I choose not to eat pork (based on my Jewish background).

Eric’s family’s dumplings were normally made with ground pork, chive and homemade ‘skins’ when he was growing up. (‘Skins’ are what Eric calls the dough used to make the dumplings: we continue to use this word as it is the literal translation of the word from Chinese to English). We buy the ‘skins’ in Chinatown instead of making them by hand – it would take many hours to do that!  We typically put ground-chicken and chive in our dumplings because I choose not to eat pork (based on my Jewish background). We have also made vegetarian dumplings if our friends who keep Kosher come to our house for the holiday (black mushroom, cellophane noodles and egg).

At the party we put everyone to work, literally!  The ingredients are already put together by us, but our guests have to make the dumplings themselves.  Eric always gives a tutorial as a reminder of the ‘art of making a good dumpling’ and with about 20 friends over for the festival, we make 500 dumplings and eat more than half of them.  We send friends home with their breakfast for the next day (fried dumplings) and good memories!  This month will be our 9th annual dumpling making party!

Since our daughter was born, we started to include the traditional red envelopes with our party too.  We give each kid a few brand new dollar bills as a gift.  The money inside the red envelopes has to be crisp and fresh – representing the new year ahead. Although the kids at the party do not understand what money is used for yet (they are all ages 4 and under!), they sure love getting the special red envelopes handed to them.

This year we’ve been reading our daughter a book called “Bringing in the New Year” by Grace Lin.  It’s a board-book in which a Chinese-American family prepares to celebrate the Lunar New Year.  Now that our daughter is really into celebrating holidays, we want her to understand the uniqueness of her 3 separate New Year celebrations (Chinese, Jewish, and American).  This book incorporates vivid colors and catchy phrases that keep her entertained. There are also some Chinese words used that she is learning as we read it over and over again.  The father in the book goes by ‘Baba’ which is what she calls Eric, so it is familiar to her and she can recognize herself in the actual story (bonus!) 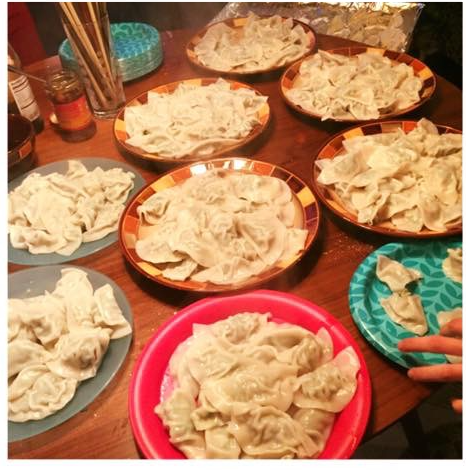 I hope one year that Eric, our daughter, and his extended family can be in Beijing to celebrate the Chinese New Year, just like I did so many years ago.  Much like how I was immersed in the cultural activities, I want our daughter to carry on those traditions as well.  For now, we’ll keep celebrating with friends and making new memories for years to come in our home.