Multi-award-winning children’s book author, and writer Uma Krishnaswami has written on a variety of topics, spoken to audiences across North America and Asia, and has had her books translated into 11 languages. In our interview, we asked Uma specifically about her book, Bringing Asha Home, a book, primarily about an interracial couple and their biracial son adopting a little girl, Asha, from India and their emotional highs and lows as they go through the long process of international adoption.  Read our review of the book here.

Bringing Asha Home shows a mixed-race couple going through the process of adopting a little girl from India. Why and how did you develop this family dynamic?

I’d had two books out when I first began thinking of this story. I lived in Maryland at the time, and I was invited to speak to a group of families, all of whom had adopted children from India. They were incredibly welcoming and I had a lovely time. I read to the kids. I talked to the parents. I listened to their stories. It occurred to me that no one had written a picture book with this particular dynamic at the heart of the story. [perfectpullquote align=”left” cite=”” link=”” color=”” class=”” size=””]I knew that it wasn’t my personal story, that I was an outsider to this narrative.[/perfectpullquote]

So I did some more formal interviews with a few of the parents. I began to get a sense of what that process might feel like. Many of them were mixed-race, and that appealed to me because it seemed, again, to be a huge gap in the literature then. Somewhere along the way, I became convinced that if I approached this carefully, with realism and humility and from close to a child’s perspective, these families were giving me permission to create some composite version of their stories.

One of the reasons I loved the book was because the entire family goes through their many emotions during the process of adoption which we learn through the eyes and thoughts of 8-year-old, Arun. What made you choose the brother’s point of view as the primary one?

Well, I was a witness to the process of adoption in my conversations with the Maryland families, so I felt very strongly that I couldn’t tell the story from the viewpoint of the adopted child. So I started to think about who could be a witness, to a family going through this long, sometimes frustrating and often difficult process. My son was about eight at the time and I spent a lot of time driving kids around and listening in on their conversations, so that is in part where Arun’s character came from.

What inspired you to write this book? What message/s were/are you hoping to have communicated via the story?

Real life is always the best inspiration. I was touched by the commitment of the families. Having adopted from India was something that brought them together and also something that made them reach out to people like me. They were trying to support their children by giving them opportunities to forge an identity somehow, an identity related, however tenuously, to the land of their birth. I don’t think that I had a clear message of any kind when I was writing the story. I rarely do. The story comes first and whatever meaning it might have emerges organically. It’s not controlled by me. But I did have the sense of wanting to show how the relationships grew within this fictional family, of how they adapted and shifted to deal with each new obstacle to the arrival of this child in their home.

[bctt tweet=”They were trying to give their adopted children an identity to the land of their birth.” username=”ParentVoiceMag”]

You don’t fluff things up. The long wait for the adoption to come through is realistic. What were your thoughts in developing this kind of a realistic depiction of the entire process?

I wanted it to feel real. I wanted the families who had shared their stories with me to be able to recognize themselves in this book. I had a couple of the parents read drafts for me for this reason, to see if my timeline as well as my representation of the emotional ups and downs, struck chords for them.

I don’t know. The group I met with had all those demographics represented, so this family could have fit any of those models. [perfectpullquote align=”right” cite=”” link=”” color=”” class=”” size=””]Looking back, I think I wanted to show an interracial couple, because again, at that time there were so few books that did that.[/perfectpullquote]

And I wanted to show the race of the parents in an incidental way. It was not the point of the story. It would only show up in the illustrations and never once be mentioned in the text. Had I made a different choice, of course, it would have affected some things in the story—but I’d like to think those things would also have been subtly shown because they would have to do with adult concerns. 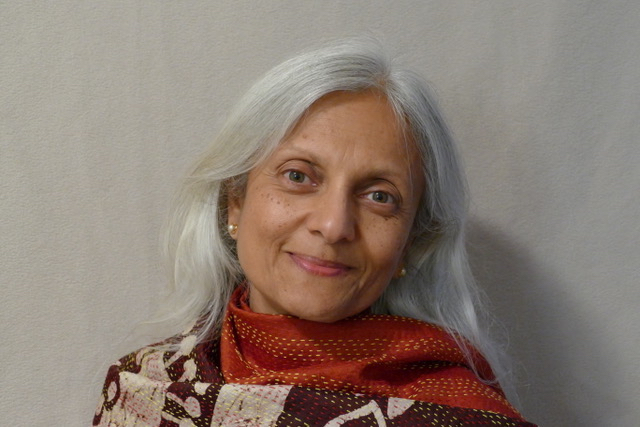 This adoptive family already has a biological son. You don’t write about why they might have wanted to adopt from India. Can you give us some background thinking that went into your creative process in developing the premise of this book?

I did know one or two Indian couples who had adopted children from India. One couple already had a biological child. They had many reasons for wanting to adopt. In part, those reasons had something to do with being from India, having seen poverty and despair and the incredible heart of India’s kids. And maybe wanting to do one thing in their lives to give back in a way. But all that was not what my book was about. I didn’t want to beat the reader over the head with the adults’ driving motivations. They were beyond the scope of this book.

I did want those motivations to show through in how the parents talk to Arun about the new baby. They decide, for example, not to change her birth name but they don’t make a big deal about it. Dad brings the rakhi home along with Asha, so he’s acknowledging a touch of caring there. I did that because I wanted to acknowledge what some of the Maryland families told me—that the institutions and processes they dealt with in India were often harsh, sometimes brutal, but even so there were people along the way who were kind, who tried their best. Clearly, my book, with its focus on the adoptive family, was a place to shine the light on small kindnesses.

Rakhi, and indeed its bond is sort of the thread that hugs the entire story together. The cultural nuance of rakhi woven into the story was certainly unique to this book. How did you think of this?

As I wrote the book, it became clear that it was going to be about the growing connection between a brother and a sister. Not something I know personally, I must confess, since I am an only child, but I was pretty sure about that focus. So I was thinking about the passage of time and wondering how to mark it in successive scenes. A birthday made sense: One of the Maryland families had talked about celebrating their new baby’s first birthday before she arrived. But when I thought about holidays, rakhi kind of leaped off the calendar at me. Of course! What else could it be? It was not just a temporal marker but a deeply significant symbolic one as well. Over several revisions, it became an integral part of the story.

If I may say, this is different from your other books. What made you write a book about adoption and family bonds thus formed?

I don’t know why some ideas take possession of me and others pass me by. But I do believe that as a writer I can’t plan the stories I’m going to write. All I can do is leave myself open to ideas and emotions and connections that will come my way. Open, in a way, to life itself as a source of narrative.

Bringing Asha Home was published in 2006. If you were to revisit this premise/theme today, would you have written the same story? Are there other things that have emerged in the adoption community in recent years that you may have addressed, instead?

What a great question! I don’t know what it would be, although I’m happy with what it is, what I did write over a decade ago. I’d still do the research, meet with people who knew more than I did, all those things. And yes, I may have gone in a different direction but I can’t really say what that direction would have been. And look at technology, how it’s changed our lives. Would there be cell phones and Skype in this book in 2017? Would that bridge the distance, or make it even harder? Does instant communication raise instant obstacles? And what about the politics of adoption? That has changed too. Would I mask the bleaker elements less? Would Asha be thinner, frailer? Maybe. I don’t have specific answers, although it’s always interesting to speculate—to ask “what if?” Regardless, I’ve changed and grown with the passage of time, so the book simply captures the writer I was when I worked on this back in the early oughts.

[bctt tweet=”Truth, you see, intersects with fiction in the strangest ways.” username=”ParentVoiceMag”]
Anything else relevant to the book and/or the story that I might have missed?

Soon after the book was published, I got a call from the Salt Lake Tribune asking if I knew that Utah’s first family (the Huntsmans at the time) were waiting for a baby girl named Asha to come home to them that year and that on their mantelpiece was a copy of Bringing Asha Home. So truth, you see, intersects with fiction in the strangest ways. A few years later, a couple in Albuquerque contacted me to let me know that their son, Raja Burrows, who was adopted from India, had just been picked to play the character of Neel in a musical based on my picture book about the partition of India. The musical was ‘Tea With Chachaji’, and Raja, I’m thrilled to see, is now an actor with New York and regional roles under his belt. Again, an example of how this book opened me up to the adoption narrative in ways I never dreamed of.

If you are an author and want us to review your book, please contact us at theteam@ theparentvoice.com

If you like our recommendations, please use the appropriate links above to click and make your purchases. Doing so helps us get a small commission so we can keep this website going and it does not cost you anything extra. Thank you.

Suchitra S. Packer is the Publisher, Founder, and Editor-in-Chief of www.theparentvoice.com; creative designer and entrepreneur with Essaberry, and narrator for 'Diversity and Us', a YouTube channel for reading aloud books on multicultural themes. Suchitra is also a work-from-home-mama of two multiracial kiddos and lives in the northeastern United States with her family. View all posts by Suchitra