Continuing our discussion on What is Wrong with “American” Parenting? Insights into and Lessons from Danish and German Parenting, we present an exclusive interview with Sara Zaske who’s book, Achtung Baby: An American Mom on the German Art of Raising Self-Reliant Children

Although we would have liked to chat more and get answers to all our questions, Sara, understandably, is on a book tour making media appearances, interviews, book readings, and so on. Amidst her travels, she found time to answer our more important questions and we present them to you, our readers.

Whether you choose to agree or disagree with Ms. Zaske, her responses certainly provoke some reflections on our own styles of parenting. We would love to hear from you. Feel free to comment at the end of the interview or write directly to theteam@theparentvoice.com

1. Over the years of living in Germany and now having returned to the US, can you tell our readers about (a) (examples) how you came face-to-face with what potentially were your own cultural norms when it came to parenting while in Germany– (b) how you acknowledged that they may be wrong (because, they may have been misguided – see below #5), (c) how you then made sense of them in the context of new parenting lessons you learned in Germany, and eventually (d) developed your own parenting style?

There are many examples of this in the book; the most obvious is children walking to school by themselves and in general engaging in unsupervised play:

I walked my daughter to school every day in second grade and part of third grade, even when all the other children her age were walking or biking by themselves. The teacher at her school had also taught them traffic safety and taken the whole class out for a walking tour of the neighborhood to help prepare them to walk on their own. Sophia campaigned to walk to school on her own, and I could not deny the simple fact that hundreds of children are doing this all over Berlin, and they were fine. When I finally did let her go on her own—it was wonderful. She was so proud and independent. She would get up in the morning, make her own snack, pack her bag, and say goodbye to me at our front door. Now back in the US both my children, who are now 8 and 11, walk to school every day.

Another example is the time I came to pick my daughter up from a play date in Berlin and found her and her friend across the street at the playground by themselves. They were eight at the time. This is normal in Berlin, but it is not normal for Americans. Again, I started to realize how important it was that kids have this independence. The ability to play without parents hovering or interfering is critical to learning social skills and ultimately to growing up. Now in the US, my kids go to the park down the street when they want—I make them take a flip phone and insist that they stay together, but those are my only concessions to the American cultural sense of safety. 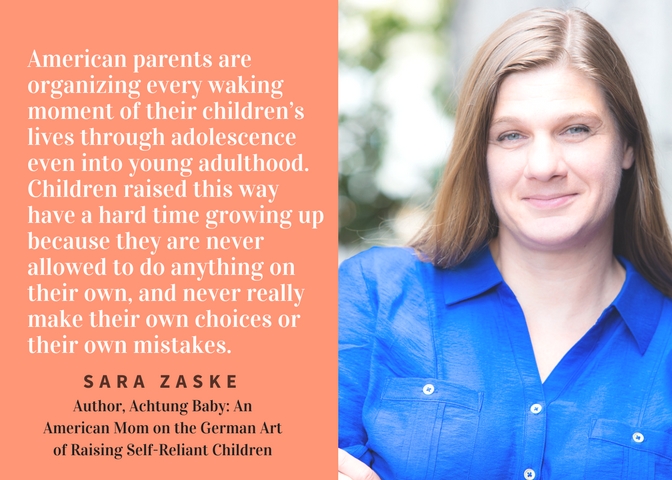 2. Understandably, if one has had a happy childhood and has a good relationship with one’s parents/caregivers, one may attempt to replicate a similar parenting style. After having learned German ways of doing things, how did you reconcile your own childhood experiences (and what you knew) with those that you learned?

My childhood was fairly free—at least in terms of physical mobility. I played outside until my mother called me in for dinner. It is only recently that Americans have become so overprotective. Living in Germany made me take a hard look at why I wasn’t parenting like I was raised.

The one area that is different from how I was raised is intellectual freedom. Germans do not hide information from children the way we do in the US. They talk openly and teach children early about sex, religion, death and of course, the darker parts of their history. These topics have always been somewhat taboo in the US when it comes to children. I now see this as a serious mistake. These issues are a huge part of life, and to deny children access to information about them puts them at a tremendous disadvantage as adults. A clear example is sex education, which is taught in German schools and openly discussed, while in the US, many parents delay or never discuss it with their kids and sex education in school is inconsistent at best. It shouldn’t be a surprise that the more informed German teenagers have lower rates of teen pregnancy, abortion and HIV than their US peers.

3. Personally, from having grown up in India, having married a Canadian, having learned about parenting and being a parent in the US, and having read a lot of different kinds of parenting books, I have my own hybrid form of parenting. Was this ever something you thought of doing – Combining the elements of parenting across the two cultures to which you were exposed?

I don’t think you can avoid combining parenting methods especially if you live in a foreign country. It’s impossible to ever escape your home culture completely, and when you are immersed in another parenting culture, you have to adapt.

4. From reading the book, it appears that after an initial culture shock, you completely embraced German ways and if I could go as far as to say, “went native” and with good reason(s). Would that be a fair assessment of where you stand with regard to parenting values?

Yes, near the end of our time there. I was still more cautious than most German parents, but way more relaxed than most Americans. I was caught somewhere in the middle. 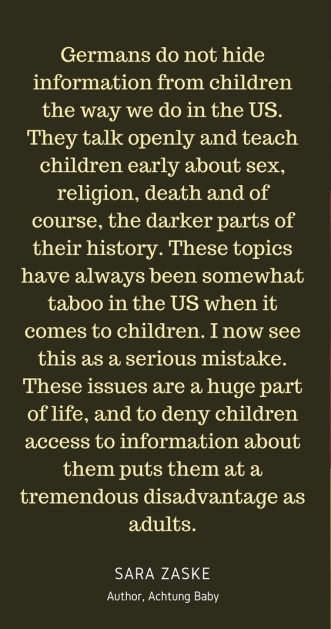 5. You call some core American parenting values (such as, correcting children, constant supervision, emphasizing academic achievement, prioritizing safety) as misguided and you elaborate on these throughout your book. For our readers who have not read the book, would you please identify these values (or some of them) and briefly tell us why you find these values misguided? (also see #9 below)

Please take some of my answers to this from the book, Achtung Baby: An American Mom on the German Art of Raising Self-Reliant Children

6. How do you think Americans are parenting differently now than they did, say, 30 years ago? Of the many new “trends” – helicopter, free-range, attachment, etc…what one turn do you think has been the worst (or best) for American parenting (and kids)?

Helicoptering or overparenting has become the dominant style of parenting in America, and it is the most damaging because it is based on fear, often exaggerated fear, and it’s very pervasive. It’s not just individual parents, but the society around us that seeks to constantly control children. For instance, the after-school activities that force a parent to come in and sign their kid in and out – that precludes a child walking to the activity by themselves. Or the “busy body” neighbors and strangers who call the police when they see a child alone in a car or walking by themselves. This culture instills fear in children and assumes that children are incapable of even the simplest things like being alone for a few minutes. Children need just the opposite of this culture. They need people who will support their moves toward independence.

7. I agree with you that the American parenting landscape has gotten to a point of extreme paranoia. Whereas, for example, kids in other countries are allowed free movement, we tend to be overcautious, live in perpetual fear of them being kidnapped or something equally bad or worse happening to them, or getting a scrape or a cut in the playground!! You recruit several evidence based research, statistics, and such to demonstrate that there really is no need for this kind of a ‘culture of control’. Understood.

Now, how do you spread this message to engender a change in behavior? The transition to this culture of control was a gradual one, so what needs to change for us, now, as a society to go back to “the good old days” or rather, get past our anxieties and return to rational parenting?

The simple act of letting your child do something like walk to school by themselves or go to the store to buy something, empowers other parents to do the same.

More than that, I think what will change our parenting culture the most is seeing the result of the current parenting style: our young adults are not prepared to be independent. Parenting based on fear inhibits children’s ability to grow up, and we are seeing more young adults today with anxiety and depression. They are having a harder time separating from their parents and managing their own lives. That’s a heavy cost.

We cannot make the world completely safe for our children, and we cannot determine their future success for them. At some point, every child has to learn how to deal with risk and manage their own lives by themselves. We do our children a huge disservice if we give them no practice in self-reliance until they are 18 and then expect them to learn it all at once. 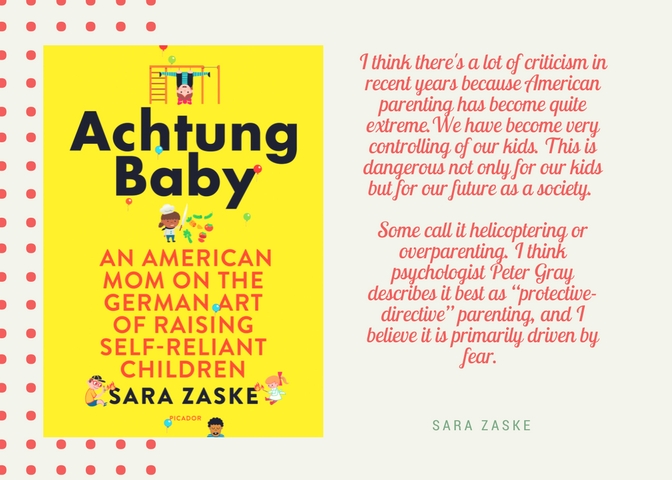 8. Why does American parenting gather such flak from parenting writers? What do we do so wrong that makes everyone in the world appear to be doing a much better job at raising their kids than us?
I think there’s a lot of criticism in recent years because American parenting has become quite extreme.We have become very controlling of our kids. This is dangerous not only for our kids but for our future as a society.
Some call it helicoptering or over-parenting. I think psychologist Peter Gray describes it best as “protective-directive” parenting, and I believe it is primarily driven by fear. We fear for our children’s safety so we protect them by constantly supervising them, never letting them have a moment alone. We fear for their future success so we direct all their academic and extracurricular activities, monitoring every slight fluctuation in their grades. When taken the extreme, American parents are organizing every waking moment of their children’s lives through adolescence even into young adulthood. Children raised this way have a hard time growing up because they are never allowed to do anything on their own, and never really make their own choices or their own mistakes. Logically we can see the problem with this – you can’t become independent and responsible adults if you are never given any independence or responsibility. We are also seeing an increase anxiety and depression among college-age adults.
I don’t know if everywhere else in the world does a better job, but we can learn from other cultures. We can certainly learn something from Germans about raising kids for self-reliance.

Suchitra S. Packer is the Publisher, Founder, and Editor-in-Chief of www.theparentvoice.com; creative designer and entrepreneur with Essaberry, and narrator for 'Diversity and Us', a YouTube channel for reading aloud books on multicultural themes. Suchitra is also a work-from-home-mama of two multiracial kiddos and lives in the northeastern United States with her family. View all posts by Suchitra